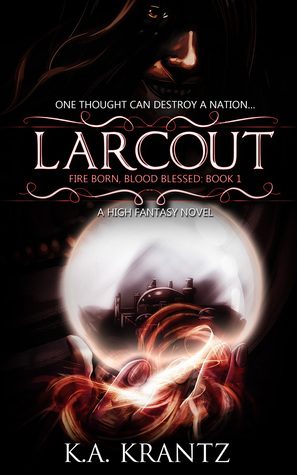 Larcout is one of ten novels in the final round of Mark Lawrence’s Self-Published Fantasy Blog-Off (SPFBO) 2016. Updates on the contest’s progress can be found here.

I’m not sure what I was expecting when I chose K.A. Krantz’s novel to be the first SPFBO finalist I read and reviewed… but it certainly wasn’t what I got! Even now, I’m not entirely sure that words can do justice to such a surreal reading experience… but here goes.

Larcout is… bizarre. It’s confusing. It’s uneven, and it’s disorientating, and it’s awesome. Above all, it’s most definitely unique.

This maxim – held by Larcout’s protagonist and repeated throughout the novel – is just as relevant to the reader’s journey as it is to the story. Kasthu (live): just go with it. Roborgu (learn): all will eventually become clear. Inarchma (burn): be prepared to have your own preconceptions – of the book, the characters, and the genre itself – annihilated.

Blood-beings can be chattel or char.

The opening pages very nearly turned me into char. Frowning, squinting, grumbling – I read, re-read and re-re-read them, struggling to comprehend just what the hell was going on. Once I’d (sort of) figured it out, however, I was hooked. Chattel to the story, you might say.

I read the first chapter with increasing interest, savouring the details of this unique and fascinating new culture and its intriguing protagonist, Vadrigyn. A blighted land with six – six! – suns, a cruel and winged fire-blooded race known as the Morsam, a sentient sea that keeps them prisoner, and a half-breed outcast with both strength and intelligence – I loved it.

Each ridge in her vambraces was a piece of a Morsam who had challenged her right to live. The ones she currently wore were far from her only pair.

Yes: I absolutely loved the first chapter. But then…

… after a brief and violent scrap with her hated brethren Vadrigyn is magically transported to an arena, where she and others are expected to engage in combat before an audience of unseen spectators. After meeting a flurry of new characters and ‘passing’ the test, our protagonist is again uprooted and replanted somewhere new – this time to the insular Jewelled City, where she learns that she’s now ‘bonded’ with a mentor named le Zyrn. More, the bond can’t be severed until Vadrigyn passes her Trial of Identity… or until one – or both – die.

I’ll be honest and say that I read these chapters with increasing incredulity (and raised eyebrows). Having looked forward to an account of Vadrigyn’s survival techniques and anticipated her cunning escape from the cruel and unforgiving land of her birth, instead I got to watch as she was bundled on the deus ex machina express straight into the Hunger Games and then on into the Capitol – all in the space of a single chapter.

Thankfully, things stabilise somewhat from there on in… though I can’t say I’m a fan of the jewelled city itself, which is a bit too fanciful for my liking. Repetitive and simplistic descriptions oversaturated with the names of precious stones abound; yet I somehow struggled to envisage the layout of the city itself, despite continual references to its different tiers.

However, I did appreciate the ways in which the city’s political, economic and geographical circumstances resonated with today’s issues and tense global climate.

This is about opening the gate and re-engaging in trade with our neighbors. It makes dire predictions about famine and plague descending upon the dome, and urges civil war if the gate remains closed. It accuses the Order of Minds of deceiving the populace, of tricking our people into believing we are prosperous as an isolated nation.

For me, this aspect of Larcoutian culture also has echoes of the Ministry of Truth from 1984: after all, the Order of Minds can provoke conflict, influence emotions and even alter memories, effectively controlling the desires and behaviours of the entire populace. This facet of the story is, unfortunately, not used to its fullest potential, and is relegated instead to a convenient feature of the plot to be called on only when necessary.

On the other hand, the fact that every Larcoutian citizen eventually develops some sort of similar supernatural talent is almost awesome enough for us to overlook this slightly disappointing unevenness. In addition to the Order of Minds, Krantz also gives us the Order of Stone (who can manipulate the earth to extract precious materials, and who are trained to use their powers for combat as well as construction) and the Order of Body (healers, essentially). The subtleties of each order – not to mention the convoluted way in which families are intertwined by the unpredictable mentor-acolyte bonds – adds yet another layer of conflict to the story, which is confusing but fascinating.

And it isn’t just the Larcoutians who possess these talents; our heroine has some fantastically lethal gifts of her own, not least of which are the Dorgof. The Dorgof – deadly, venomous parasites fused to the bones and muscles within Vadrigyn’s forearms – burst forth from her palms whenever she feels threatened, and make it impossible for any other living creature to make physical contact with her hands.

Death by her touch was not instant, but it was assured.

As you can imagine, these living weapons make for plenty of vicious and bloody fights. Even when Vadrigyn refrains from calling on the Dorgof, her own Morsam strength and self-taught skill in battle make for some equally violent scenes – many of which I couldn’t help but picture in the slow-motion-blood-spray cinematic style of a Zack Snyder movie or an episode of Starz’ Spartacus.

Vadrigyn pivoted. Her fist connected squarely with the nose of the closest fool… and punched through the back of his skull. Blood and brain oozed down her wrist and stained her vambrace. The body reduced to sand, leaving her with a skull bracelet.

Vadrigyn is a brilliant heroine because she’s strong in other ways, too. Resourceful, pragmatic, adaptable – our protagonist is quick to learn (roborgu) and becomes increasingly open-minded as the story progresses. She’s also surprisingly loyal, as well as (unsurprisingly) honest; and best of all, she sticks to her principles whilst also demonstrating a rare willingness to listen to reason.

The biggest issue I have with Vadrigyn’s character is the fact that she adapts a little too quickly to her sudden transition from Agenwold to Larcout. Though she’s at a huge disadvantage in every situation, she rarely proves to be less than competent. She dons women’s clothing and learns to dance with minimal resistance; and her grasp of Larcoutian politics and history is somewhat inexplicable considering that her entire life has been spent in an uncivilised land filled with blood and battle. The reader never really has cause to doubt that Vadrigyn will survive, and this sense of invincibility can, at times, make her difficult to empathise with.

If she could not have freedom, she would have dominion.

However, it’s impossible not to admire such aggressive resolve, and such flat-out refusal to become a victim. This mindset is what really makes Vadrigyn an effective protagonist. I shared her frustration with the Larcoutian women’s complicity in their own weakness; the refusal of even the most forward-thinking of them to understand that power lies not only in the body but in the mind. Vadrigyn is a perfect antidote to the Jewelled City’s strict patriarchy; and watching her demolish expectations, traditions, prejudices and manipulations is immensely satisfying.

I do feel obliged to point out that there are occasions where the author’s over-excited prose makes things more confusing than they need to be:

Vadrigyn stood helpessly frozen as disbelief rode the cold pulsing with every rampant heartbeat, threatening to collapse her skull and explode her lungs from competing pressures.

At times like these I would either re-read the lines until my eyes glazed over, or simply allow myself to drift over such segments until I reached a part less saturated with hyperbole.

It’s this unevenness that made Larcout so difficult to rate. In my opinion, the prologue deserves at least an 8; the second chapter, a 5 at best; and so on. An uneven yet well-written tale, Larcout is bizarre and imaginative, with moments of brilliance that shine brightly enough to banish the shadows of confusion that obscure its early chapters. Though far from perfect, I still find myself thinking about it (despite finishing it days ago), and can say with certainty that the sequel will make its way onto my ‘to read’ list.

This review originally appeared on Fantasy-Faction on 30th November 2016.