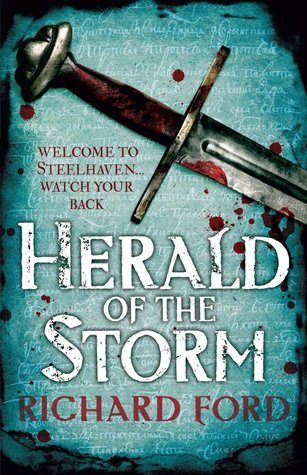 Comparisons to other authors can hurt a book rather than help it. Typically, readers draw parallels between Ford’s work and that of George R.R. Martin (though let’s face it, it seems rare nowadays for a fantasy novel to escape comparison to – or endorsement by! – ol’ GRRM). Richard Ford’s debut is no exception. However, aside from the structure (alternating chapters from differing points of view) and maybe a bit of the grittiness I wouldn’t personally make this comparison, partly because ASoIaF is something of a sweeping epic, while Herald of the Storm concerns itself entirely with the city of Steelhaven.

The contained setting is, for me, the book’s strongest point. The plot is tight and pacy, and the ways in which several of the individual storylines were eventually interwoven was nicely done. There are two or three main plotlines occurring at the same time – an illegal slave-trading operation, a royal assassination attempt, and an act of dark magic – and it’s interesting to see how different characters are involved in each plot, and how each mini-plot becomes relevant to the bigger picture. In fact, the whole book does a nice job of laying the groundwork for the rest of the series.

I enjoyed the diversity of the characters: there’s Kaira Stormfall, morally upright Shieldmaiden of the goddess Vorena; Janessa Mastragall, innocent and headstrong heir to the throne; River, an assassin with a conflicted soul; Merrick Ryder, a former duellist and dandy who has fallen on hard times; Rag, a street urchin and pickpocket; Nobul Jacks, soldier-turned blacksmith-turned city guard; and Waylian Grimm, apprentice in the tower of magick (no, I’m not sure why it has to be spelt with a ‘k’ either). Although there are a fair amount of characters, the variety between them really makes it work.

The author cleverly uses the novel’s form to keep certain things – e.g. the identity of certain characters – hidden until key moments. Ford uses alternating PoV chapters to gradually reveal surprising connections and illustrate the impact of characters’ decisions on others. I did feel that some storylines felt a little out of place: Rag’s story came to feel a bit irrelevant, and Waylian (and magick in general) also seemed somewhat shoe-horned into the story. However, the final chapters for these characters do seem to suggest that both will play a larger role in future novels.

A quick point about the language: I don’t have a problem with profanity in fiction, as long as the language fits with the character of the person who’s saying it. The author has created several less-than-golden characters here (many of whom swear frequently), and while they suit Herald’s grimdark tone the fucks and shits do become a bit tiresome!

Earlier, I mentioned the use of GRRM as a benchmark for modern fantasy novels. Fact is, I bought this book on the strength of its comparisons with Joe Abercrombie. While I can certainly see the similarities – character-driven storytelling, grimy characters, dirty deeds – Ford’s characters didn’t quite spring to life for me in the same way as Logen, Glokta, Monza et al., and I think this is another case of hurting a book by (unfairly) comparing it to another of a very high standard. One review raved that Herald of the Storm was actually much better than the First Law trilogy, and I couldn’t help being just a tiny bit disappointed.

However, unrealistic as my expectations were I still enjoyed the book a lot. The characters grew on me over time, and I look forward to reading Steelhaven #2: The Shattered Crown.