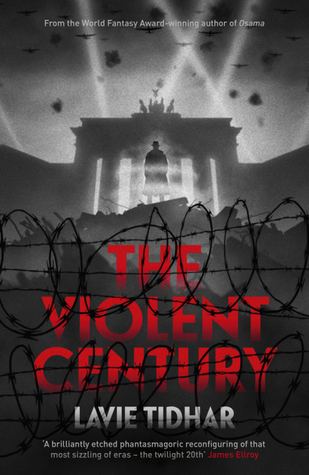 A tale of conflict, espionage and superheroes that takes place during some of the major global conflicts of the 1900s, The Violent Century is unlike anything I’ve ever read (except,

For starters, the author uses a series of interrogation scenes to frame the main narrative, during which a central character gradually reveals the sequence of events that brought him to that point. Tidhar’s superheroes, or ‘Ubermenschen’, are an exaggerated (and deliberately stereotyped) representation of the role and ideologies of their respective countries in each of the conflicts. From Britain, there’s Oblivion and Fogg; shadowy and furtive and seemingly innocuous. From the USA emerge Tigerman and Green Gunman, ludicrously costumed and arrogant. From the USSR, there’s the Red Sickle; from Transylvania, Bloodsucker and Drakul and . . . you get the picture. These characters, along with the author’s masterful use of setting and atmosphere, really create a distinctive feel of each historical era, from post-war Berlin to the Eastern Front, the Afghan desert to WWII Transylvania.

The Violent Century is almost certainly not going to be everyone’s cup of tea. It’s easy to see why many readers have been put off by the style, and disoriented by the disruptive time jumps. For me, however, the concept – and the incredible atmosphere – kept me immersed, and after a short while the unusual narrative style reads just as fluently as anything else. My only criticism of the story is that a lack of emotion connection with Fogg meant that the final payoff wasn’t quite as emotionally charged as it was probably intended to be.

Overall, though, the good stuff far outweighs the bad. Tidhar’s tone is enjoyably cynical yet wry; his underlying message – that the world would have turned out in exactly the same way even if superheroes *did* exist – is depressing, yet oddly reassuring; and the finale is sad, cathartic and incredibly hopeful. All in all, The Violent Century is a memorable story that will stay with me for quite some time. Definitely worth a read.

This review originally appeared on halfstrungharp.com on 5 May 2014.