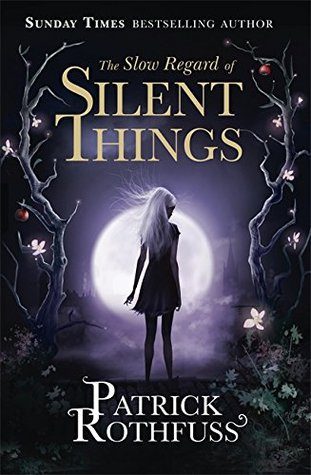 Her name is Auri, and she is full of mysteries.

The Slow Regard of Silent Things is a 150-page adventure with Auri, a minor character from the as-yet-unfinished Kingkiller Chronicles. Rothfuss has (so far) told us relatively little about her in the main series – aside from the fact that she’s been lurking in the tunnels beneath the university (which she refers to as the ‘Underthing’) for years and that she refuses to speak to anyone, or even let them approach her. From what little we see of her it’s clear that she is fragile and broken and ephemeral and unique. She is one of the series’ greatest mysteries, and it’s exciting to finally get to know a little bit more about her.

At its heart, The Slow Regard of Silent Things is a sweet narrative that gives great insight into the way in which Auri’s mind works. To Auri, everything is alive, and throughout the novella we see how she personifies her entire world. For instance, there’s Foxen, the tiny brave alchemical light who is her oldest friend; Fulcrum, a newly-acquired brass gear which is brazen yet full of love; the ungrateful blanket, who is afraid of the floor; and more, too many to name. This, along with Auri’s half-invented names for the places she visits – such as Tumbrel, Ninewise, Mantle, Crumbledon, Annulet, Billows and Tenance – is thoroughly, delightfully enchanting. As an added bonus the sketchy illustrations complement the story nicely; despite their simplicity their black silhouette-ish style really conveys a sense of the darkness and claustrophobia of the Underthing.

The Slow Regard of Silent Things is strange in that there isn’t really a plot. The entire novella is, essentially, a week in the life of Auri as she wanders the Underthing, picking things up and putting them down again in different places. I have to admit that this does get just the tiniest bit tedious towards the end, but the book is short enough and the writing beautiful enough that I poured through most of the story before I even began to think, “Wait – what story?”

There are very few authors whose work I’d buy simply because it has their name on the front cover, but Rothfuss is definitely one of them. His prose flows like poetry; his ability to make even the most trivial of things sound magical and exciting is probably the only reason this novella works as well as it does. It’s easy to see why the book has so many one-star ratings, but it’s just as easy to see why it has so many five-star reviews from others. I wouldn’t go so far as to say it’s a case of ‘love it or hate it’ . . . but it’s certainly one of the strangest, most exquisite and oddly hypnotizing stories I’ve ever read.

It’s lovely, it really is.