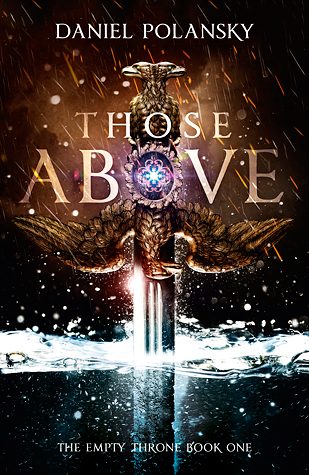 As I’ve already talked about here, the Gemmell Award longlists are up and I’m reposting my reviews of the nominees I’ve read. (I’ve already done Joe Abercrombie (here), Mark Lawrence (here) and John Gwynne (here).) Next up it’s the author of the phenomenal Low Town trilogy: Daniel Polansky.

Those Above is the first instalment of Polansky’s epic fantasy duology The Empty Throne. Set in a world dominated by ‘Those Above’ – immortal four-fingered beings who are mentally and physically superior to the human race – the story introduces those who live beneath their eternal overlords in varying states of both poverty and privilege. Although somewhat slow to get going, Those Above does an admirable job of establishing both world and character, and of artfully weaving together a series of events to set the ball rolling for the inevitable conflict to come.

Those Above utilises the familiar style of having each chapter written in third person and from the point of view of a different character than the previous chapter. This can occasionally make the story lose impetus, as this style forces the reader to pause for breath at the end of each chapter before re-acclimatising themselves with the next character. Although used to good effect the third person narrative and multiple POVs do lack some of the distinctive voice and character of Polansky’s Low Town novels, which were written in first person. However, this style better suits the epic scope of his new series; and instead of following in the footsteps of George R. R. Martin and creating a sprawling cast of characters Polansky has instead wisely opted to focus on just four, in a similar style to Daniel Abraham’s fantastic Dagger and Coin series. In this way the author manages to keep the story tightly focused and avoid the disorientation usually caused by shifting POVs.

Like Abraham’s, Polansky’s four characters are diverse and interesting, and each has their own unique perspective on the upcoming conflict due to their different situations. There’s Bas, a veteran army commander whose name and past deeds are legendary; Eudokia, a powerful noble and religious leader who schemes from behind the scenes of her Roman-esque society; Thistle, an impoverished and angry slum boy forced into crime to feed his family; and Calla, the privileged Seneschal to Those Above, unaware that she lives in a gilded cage and harbouring a dangerous secret. Each of the four characters are entertaining to read about in their own way – I particularly enjoyed Eudokia’s chapters – and though none of them actually do very much it’s clear that all four of them will have a huge part to play in the events of the rest of the series.

To sum up, then: Those Above, while not exactly action-packed, does a great job of establishing character and setting events in motion for the rest of the series. It’s entertaining and clever, and best of all contains Polansky’s trademark dry humour, albeit subtly hidden beneath the surface. Polansky’s first foray into epic fantasy doesn’t disappoint, and I look forward to reading the conclusion to the duology, Those Below.

(Review originally posted over at halfstrungharp.com on 18th January 2015.)

They enslaved humanity three thousand years ago. Tall, strong, perfect, superhuman and near immortal they rule from their glittering palaces in the eternal city in the centre of the world. They are called Those Above by their subjects. They enforce their will with fire and sword.

Twenty five years ago mankind mustered an army and rose up against them, only to be slaughtered in a terrible battle. Hope died that day, but hatred survived. Whispers of another revolt are beginning to stir in the hearts of the oppressed: a woman, widowed in the war, who has dedicated her life to revenge; the general, the only man to ever defeat one of Those Above in single combat, summoned forth to raise a new legion; and a boy killer who rises from the gutter to lead an uprising in the capital.